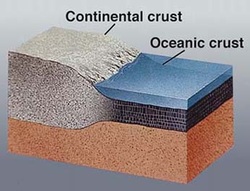 The Earth's crust is an extremely thin layer of rock, less than half of 1 percent of the planet. But the crust is equally important, and not just because we live on it. The crust can be thicker than 80 kilometers in some spots, less than one kilometer in other places.There are two types of crusts, they are the oceanic and continental. The oceanic crust is part of the lithosphere that’s under the ocean basins. It’s usually 10 km thick which means it is much much more dense. The continental crust is a layer of igneous, sedimentary, and metamorphic which form the continents and the areas if shallow sea bed, it also contains mostly granitic rock.